If you’ve ever wondered how fast a bear can run, the answer we’re about to tell you will surprise you. Despite their robust physique and large size, bears are very fast. If they want, they can reach an a speed of 35 mph! However, as there are several types of bears, each of them can reach a different speed. In this article, we’ll talk about how fast bears can run and for how long. So let’s start!

So How Fast Can A Bear Run? Depending on the type of bear, the speed they can achieve is between 20 and 35 mph. The grizzly bear can reach a maximum speed of 35 mph (56 kmh) for approximately two miles. Compared to humans, the fastest man on the planet (Usain Bolt) can run at a speed of 27.33 mph (43 km/h).

Just like humans, bears can reach their maximum speeds only when they are at full strength and at the peak of their athleticism. However, young and old bears are much slower. Therefore, there are also other factors that impact the speed a bear can achieve.

A bear will run faster on a flat surface, especially if it is chasing prey in front. In the next lines, find out how fast bears are and whether it’s worth running away from them.

How Fast Can A Bear Run?

Each bear specie can reach a different speed. As we have already mentioned, not all bears run at the same speed. Therefore, their maximum speed differs. How fast they can run is determined by several factors, mostly their height and weight. Here is the list of bears that live in the US and how fast they can run:

How Fast are Grizzly Bears?

The Grizzly bear is the fastest bear and can run at a speed of 35 mph (56 km/h), which is 50 feet per second. However, Grizzly bears can only run at maximum speed for a short period. But on the other hand, you should know that if a Grizzly bear is faced with great fear or hunger, it can develop an incredible speed of up to 40mph in a race!

Check out how Grizzly runs at full speed:

How Fast are Kodiak Bears?

Kodiak bears live in Alaska, and they are slower than Grizzly bears. They have a maximum speed of 25 mph (40 km/h) and can run approximately two miles at full speed. But when the Kodiak bear finds itself in an extreme situation, it can be as fast as the Grizzly, reaching a speed of 40 mph!

How Fast Are American Black Bears?

The maximum speed of an American black bear in a race ranges from 25 mph (40 km/h) to 30 mph (48 km/h). However, a black bear can maintain this speed for a mile. Although it doesn’t seem like much, considering that a black bear can easily catch up with you at that speed, its running power is still a huge threat to humans.

How Fast are Polar Bears?

A polar bear can run at a speed of 25 mph (40 km/h). We are talking about large bears whose weight is around 1,500 lbs (680 kg) and whose speed surpasses even men. These types of bears live only in Alaska.

Why Are Bears Fast?

When we watch a bear on TV, we get the impression that it moves very slowly, and therefore it is hard to imagine that such an animal can be very fast. In addition, bears’ walk is slow, and has thick fur. All this leads us to think that the bear mostly has fat on it.

But such thinking is very far from the truth. Beneath the bear’s soft and thick fur, there are incredible muscles that enable bears to run fast when the need arises. Also, did you know that their muscles do not weaken while they rest? Research has shown that after waking up from hibernation, bears do not lose any strength compared to their physical fitness before sleep.

Strong muscles require a lot of quality protein to keep the bear muscles in shape, so the bear must consume a lot of protein. That is why the bear has evolved a predisposition for fast running.

Big claws also help bears to reach maximum speed at a full run. A bear can have claws as long as 4 inches long. When a bear runs on a soft surface, which is usually the case in their natural habitat, the claws help it sort off bounce off the ground and thus become faster.

Claws have no role in developing a bear’s speed on flat surfaces, such as asphalt. On the contrary, in such cases, the claws slow them down.

Can A Human Outrun A Bear?

No man is faster than a bear. Although bears are much larger and bulkier creatures than humans, they can reach incredible speeds. The maximum speed of a human at a full run, depending on age and muscle development, is between 10 and 15 mph (24km/h).

The fastest man on Earth, Usain Bolt, can run at a maximum speed of 27.33 mph (43 km/h). As we already mentioned, bears can develop running speeds of 20 to 40 mph (64 km/h). The conclusion is simple, not even the fastest man in the world can outrun a bear.

What Should You Do If You See A Bear?

When you face a bear, do not move, especially do not run or turn your back. Instead, be calm. Slowly climb onto a nearby rock or stump. Once you are in a higher position, you can spread your arms and slowly wave.

Bears also don’t like noise. By speaking, you will make it clear that you are not an animal but something that is not normally on his menu.  If the bear does not move away from you and you want to move away, move to the side in small steps. That way, you can watch it as you walk away and monitor its intentions.

It’s always good to have pepper spray with you. If the bear attacks you, you can spray its face. The bear will temporarily lose sight and have difficulty breathing. This will give you enough time to escape. You should know that pepper spray cannot permanently harm a bear.

If you like walks in nature, behave so that you do not attract the bears’ attention. You need to know that bears don’t eat people and that people are very irritating to bears, especially if they are loud.

That’s why the best advice when walking in a forest with bears is to make noise. Bears are bothered by noise and will not approach you. Unless you carry a supply of food that is tempting to them.

Here is also a good video that may help you if you meet a bear.

Therefore, avoid a race with a bear and don’t walk throughout the forest with food that is not well protected in a way that does not release a smell. Bears have a very good sense of smell and can smell food very easily.

If you decide to go camping, be sure to take a compass with you. Here you can read How to Use a Compass Without a Map?

What is the world’s fastest bear?

The grizzly bear belongs to the group of fastest bears and can reach a maximum speed of 35 mph. But when it is very scared or hungry can run at an incredible speed of up to 40mph! In second place is the American black bear, its average speed is 30 mph.

Can a dog outrun a bear?

Can Usain Bolt outrun a bear?

Usain Bolt can reach a maximum speed of 27.33 mph. Bears can reach running speeds of 20 to 40 mph. That means that Bolt could possibly escape from a sloth bear or panda bear, but not from a Grizzly or American black bear.

It’s hard to believe that bears can be so fast that they can easily win a race against Usain Bolt! But that’s the truth. The slowest bear species, such as sloth bear and panda bear, have an average speed of 20 mph, while the fastest species, Grizzly and black American bear, can reach speeds of up to 40 mph in extreme situations. Therefore, if you encounter a bear in the wild, do not run, but remain calm, make yourself taller, and speak to him in a moderate tone. Never turn your back on a bear. If you want to move away from it, do it slowly. 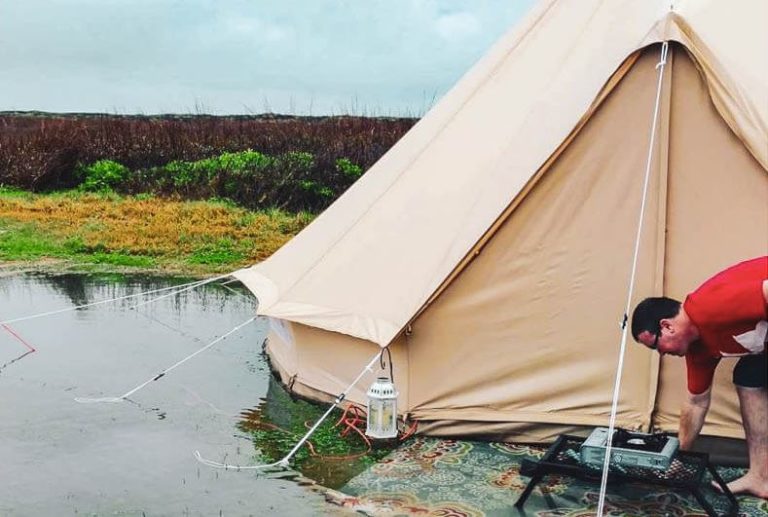 Most people think that canvas is already waterproof since it is a very durable material. I found myself in a tent out in the open while raining, and I can confirm that the canvas is to some extent resistant to water penetration. But the canvas is certainly not completely waterproof! Therefore, if you wonder if… 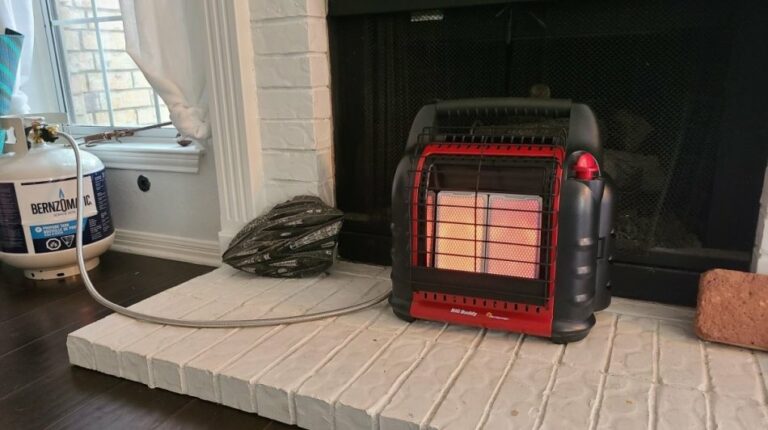 Spending a few days or weeks in nature, far from everything, is the ideal vacation for many. Because of this, RVs are not losing their popularity, on the contrary, they are gaining more and more new users. And while most people tend to camp during summer, there are those who love winter trips. But, for… 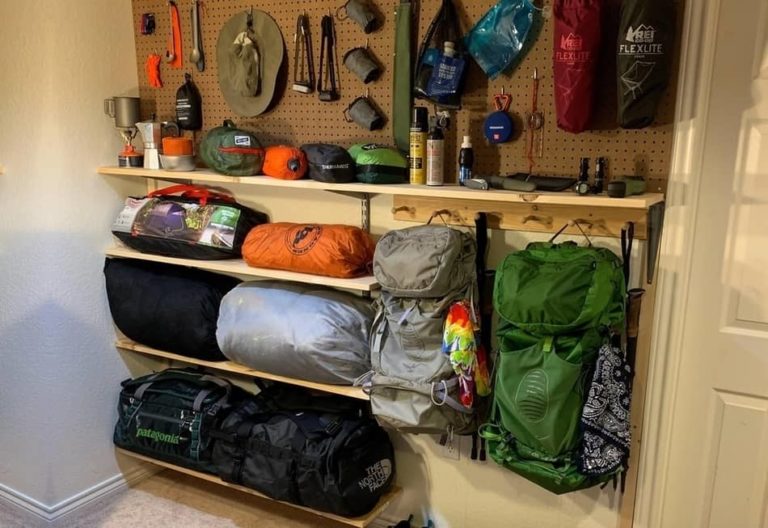 Thinking about where to store all of your camping gear after you return from a camping trip may give you nightmares, but this does not have to be the case. If you choose the right place where to store it in your home and if you have a good storage system, you will never have… 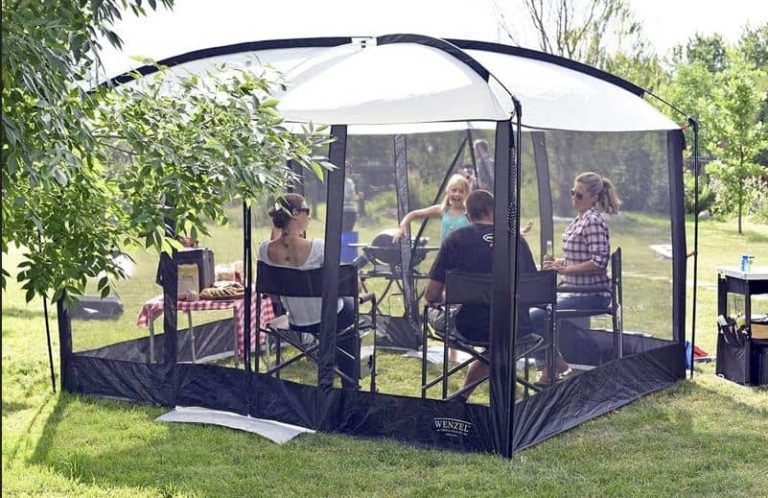 A screen tent (also known as a screen room) is a very simple tent that can be set up in just a few minutes without too much effort. If you are on a camping trip and bad weather suddenly appears, a screen tent can save your day. Therefore, having a high-quality screen tent is a… 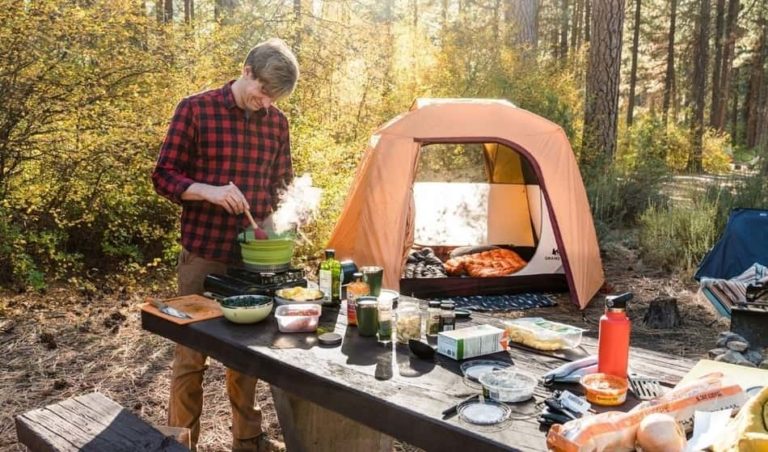 Camping is a great adventurous bonding activity that can be done with friends and family. When planning a camping trip, food must be a priority. Also, travelers cannot stop and have lunch at a restaurant or hotel. That’s why food should be planned out for camping trips in advance. Going for a 3-day camping trip… 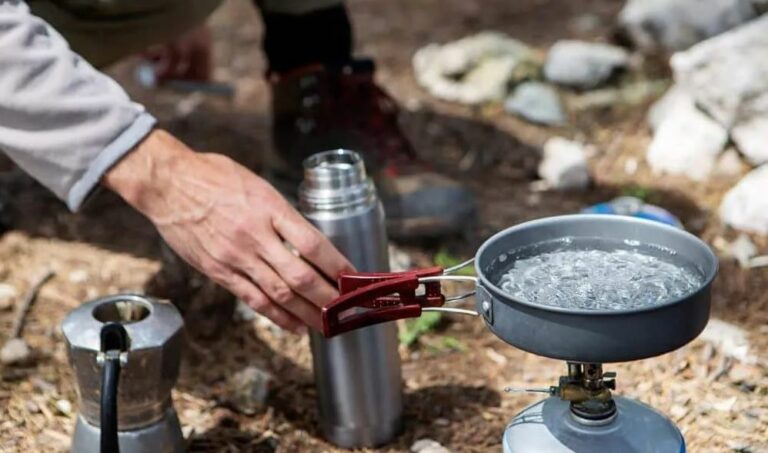 If you’re a camping enthusiast or have simply decided to spend the weekend in nature, one of the most important things you’ll want to know is how to boil water while camping. Even though it’s a basic task, it’s also one of the essential ones, and there are many ways to do it. However, it…